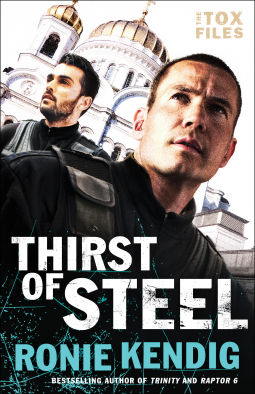 About:
Dismantled centuries ago, the sword of Goliath is still rumored to thirst for its enemies’ blood. Cole “Tox” Russell only wants to begin his life with Haven Cortes, but he must first complete a final mission: retrieve that sword and destroy the deadly Arrow & Flame Order. The AFO, however, is determined to claim the sword. Wielding their father’s life over Tzivia and Ram Khalon, they threaten to expose Ram’s long-held and dangerous secret while demanding Tzivia locate the sword. With the Wraith team slowly being torn apart, things only worsen when Mercy Maddox, a new operative, emerges with the stunning news that the sword is tied to both Ram’s secret and a string of unsolved serial murders. Tox, Ram, and the others are forced to set aside fear and anger to focus only on the enemy. No matter the cost, Wraith must stop or take the enemy down with them

Genre: Suspense, Thriller, Fiction, Romance, Christian Fiction,
My Rating:3 to 5 Stars, Although I enjoyed this book it I am disappointed to have to give it 3 to 5 Stars because of some of the things that happen in it.
Recommendation: 16+ Because of Violence, Characters, and other reasons which will be in my thoughts below.
My favorite character/s: Umm, all of them? No, you say? OK, ok, I guess if I must pick it would be Chij. He’s so sweet, encouraging, protective, cool, a priceless conscience, a good friend, great mentor, walking rock to Haven, and Cole, funny when he wants to be, a listening ear. I could go on, buuutttt that would leave spoilers and we can’t have that!
My Verse for Chij Psalm 5:12
For you bless the righteous, O LORD; you cover him with favor as with a shield. English Standard Version
Haven (a given, she’s so sweet!) I love how she’s so determined to find out the truth.
My Verse for Haven is Psalm 4:1
Answer me when I call, O God of my righteousness! You have given me relief when I was in distress. English Standard Version
Ram (yup, he is!) I liked getting to read more about him, his life, and his family, he is a kind of a secretive guy…
My Verse for Ram is Psalm 6:6
I am weary with my moaning; every night I flood my bed with tears; I drench my couch with my weeping. English Standard Version
Cole/Tox (of course!). In this one, he gets in a big mess…
My Verse for Cole/Tox is Proverbs 18:24

A man of many companions may come to ruin, but there is a friend who sticks closer than a brother. English Standard Version

And the rest of the team, but these are my top favorite characters in this book.

I prefer to read things more in line with Philippians 4:8
Philippians 4:8 Finally, brethren, whatsoever things are true, whatsoever things are honest, whatsoever things are just, whatsoever things are pure, whatsoever things are lovely, whatsoever things are of good report; if there be any virtue, and if there be any praise, think on these things.
My thoughts: I didn’t think this book would be like it was… it was pretty good… I loved it and yet hated it… because of the characters actions, the plot, what happened, pretty much the whole thing, and the ending was pretty bad (as in how can the author do this to me!?!), and there were some unfinished thoughts/ideas it was kind of like the author forgot what she had started writing about then went on to another thought/idea. I enjoyed this book despite the problems I have with it. I can’t say that I agree with some of the things in this book, but it was nice. The ending was gut-wrenchingly heartbreaking! I have to say some things felt like Science Fiction or maybe Fantasy because of the “Timeless” character thing, and the whole curse thing was different from how the first books were. I was completely blindsided by how it ended! Overall it was a wonderful book though there were a few subjects I don’t agree with.
Anyway, if it weren’t for the “Timeless” character thing being like it was I would probably give this book 5 stars. It was intense, sweet, dreadful, dangerous, and all out AMAZING!!!

The author says this is the end of the series, BUT she will be doing a series with one of the other characters and it is my hope that she will clear up the loose ideas/thoughts, and if she does this book gets 5 Stars!!!