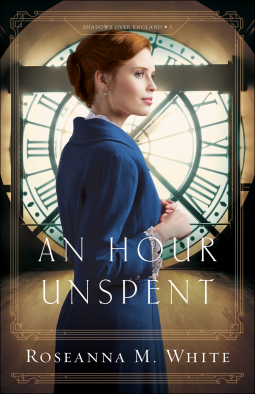 About: Once London’s top thief, Barclay Pearce has turned his back on his life of crime and now uses his skills for a nation at war. But not until he rescues a clockmaker’s daughter from a mugging does he begin to wonder what his future might hold.Evelina Manning has constantly fought for independence, but she certainly never meant for it to inspire her fiancé to end the engagement and enlist in the army. When the intriguing man who saved her returns to the Manning residence to study clockwork repair with her father, she can’t help being interested. But she soon learns that nothing with Barclay Pearce is as simple as it seems.As 1915 England plunges ever deeper into war, the work of an ingenious clockmaker may give England an unbeatable military edge–and Germany realizes it as well. Evelina’s father soon finds his whole family in danger–and it may just take a reformed thief to steal the time they need to escape.

Genre: Historical Christian Fiction.
My Rating: 5 Stars. Recommendation: 15 up.
My favorite character/s: Barclay is the big brother, I loved finding out more about him and I really enjoyed getting to see who made all of the “family” into who they were. Barclay was an awesome character. I now think he is my favorite of all of the characters in the series. I liked how he treated his siblings and was always kind!
My Verse for Barclay is James 1:27
Religion that is pure and undefiled before God the Father is this: to visit orphans and widows in their affliction, and to keep oneself unstained from the world. (English Standard Version.)
I also loved every other character, but I don’t want to give any spoilers, so that’s all for my favorite characters!
My thoughts: I loved the other books in the series, but this one topped them all so far! I loved this book even more because it had more about the rest of the “family” and I really liked the new and old characters! This book seemed even more realistic than the first two, and I am eagerly waiting for Roseanna M. White’s next book!
I received this book in exchange for my honest review. (And I am thrilled to provide it! 🙂 )