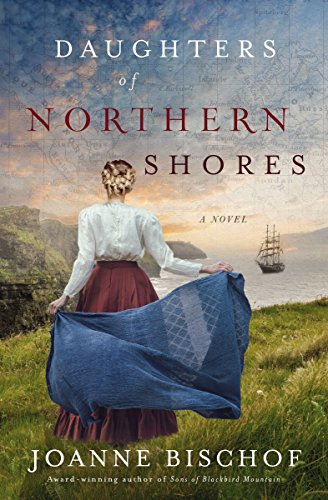 About: From Christy Award–winning author Joanne Bischof comes the sequel to her beautiful novel Sons of Blackbird Mountain.

Aven Norgaard understands courage. Orphaned within an Irish workhouse, then widowed at just nineteen, she voyaged to America where she was wooed and wed by Thor Norgaard, a Deaf man in rural Appalachia. That the Lord saw her along the winding journey and that Aven now carries Thor’s child are blessings beyond measure. Yet while Thor holds her heart, it is his younger brother and rival who haunts her memories. Haakon—whose selfish choices shattered her trust in him.

Having fled the Norgaard orchard after trying to take Aven as his own, Haakon sails on the North Atlantic ice trade, where his soul is plagued with regrets that distance cannot heal. Not even the beautiful Norwegian woman he’s pursued can ease the torment. When the winds bear him home after four years away, Haakon finds the family on the brink of tragedy. A decades-old feud with the neighboring farm has wrenched them into the fiercest confrontation on Blackbird Mountain since the Civil War. Haakon’s cunning and strength hold the power to seal many fates, including Thor’s—which is already imperiled due to a grave illness brought to him at the first prick of warfare.

Now Haakon faces the hardest choice of his life. One that shapes a battlefield where pride must be broken enough to be restored, and where a prodigal son may finally know the healing peace of surrender and the boundless gift of forgiveness. And when it comes to the woman he left behind in Norway, he just might discover that while his heart belongs to a daughter of the north, she’s been awaiting him on shores more distant than the land he’s fighting for.

My Verse for Thor is 1 John 3:18
My little children, let us not love in word, neither in tongue; but in deed and in truth. (King James Version.)

Aven was so sweet, and I loved how she grew from the first book to the second! And the way she and Thor’s relationship is, aww, they are so sweet and adorable with the baby.

My Verse for Aven is Matthew 6:14 For if ye forgive men their trespasses, your heavenly Father will also forgive you: (King James Version.)

And another favorite which is unsurprisingly was Haakon . . . And yes, I know that’s not something I should say but he was so in need of help, and I felt so sad for him.

My Verse for Haakon is Matthew 11:28
Come unto me, all ye that labour and are heavy laden, and I will give you rest. (King James Version.)

My thoughts: Bischof has done it again — honest, life-like characters with wounding pasts and she spun a tale of forgiveness, love, faith, and surrender! Her descriptions pull me right on to the ship with Haakon, the orchard with Aven, Thor, and the others. A tale that has been done many times but not with the care and the twists that were put to the often told recovery from the Civil War, and took characters rarely made or used in a story told with repetitiveness before many times.

Warnings: There were a few things that may bother other readers, and I can tell you, though I prefer not to spoil anything.

Disclosure of Material Connection: I received this book free from the publisher through the BookLook Bloggers <http://booklookbloggers.com> book review bloggers program. I was not required to write a positive review. The opinions I have expressed are my own. I am disclosing this in accordance with the Federal Trade Commission’s 16 CFR, Part 255 <http://www.access.gpo.gov/nara/cfr/waisidx_03/16cfr255_03.html> : “Guides Concerning the Use of Endorsements and Testimonials in Advertising.”