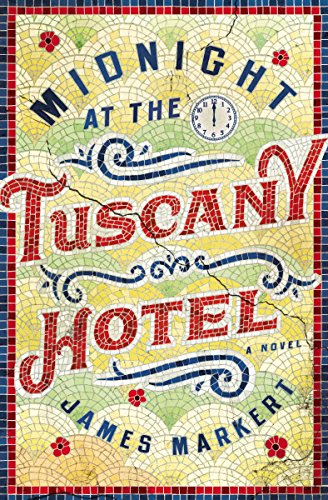 About: For years, guests of the Tuscany Hotel could leave their pasts behind and live among fellow artists. Now guests of a different sort fill the rooms, searching for their memories—no matter the cost.

Run by renowned sculptor Robert Gandy and his wife and muse, Magdalena, the Tuscany Hotel hosted guests of a certain kind—artists, actors, scientists, and engineers who left their worries behind so that they could create their latest masterpieces. Surrounded by lore, the hotel was rumored to free the mind and inspire artists’ gifts. But tragic circumstances force Robert and his family to move.

After thirteen months at war, Vittorio Gandy is haunted by memories, and his former life is unrecognizable. Once a gifted painter, now he can’t bear the vivid, bleeding colors on a canvas. His young son doesn’t remember him, and his wife, Valerie, is scared of him. But the most disconcerting change is in Vitto’s father, Robert Gandy, who has fallen from being a larger-than-life sculptor to a man whose mind has been taken by Alzheimer’s.

When Robert steals away in the night, Valerie, Vitto, and his new acquaintance and fellow veteran John go to the only place Robert might remember—the now-abandoned Tuscany Hotel. When they find him there, Robert’s mind is sound and his memories are intact.

Before long, word gets out that drinking from the fountain at the hotel can restore the memories of those suffering from Alzheimer’s and dementia. The rooms once again fill up with guests—not artists this time, but people seeking control over their memories and lives. Vitto desperately wants to clear his own mind, but as he learns more about his mother’s life and her tragic death, he begins to wonder whether drinking the water comes at a price.

A story of father and son, memories lost and found, artists and their muses, Midnight at the Tuscany Hotel explores the mysteries of the mind, the truth behind lore, and the miracle of inspiration.

My Rating and recommendation: Since I did not finish this book I will not give a rating or recommendation as that would be unfair to the publisher, author, and even possible readers that may want to check this book out but a poor rating turned them away.

My Thoughts: I enjoyed this book and read until late 80-ish, I stopped reading because of personal views but before that I had enjoyed the book, and I liked the characters and wanted to know more. Chapter 1 opened with an extremely gripping scene of a man returning from war, which I loved! Even though I didn’t finish the book I can say that I enjoyed the beginning. Plus, I fell in love with the cover but read my warnings to see if you want to read it for yourself, there are spoilers so read on with caution.

Warnings: Where to start? I was all right with the mentions of Greek gods since they’re just myths . . . but when a character had memories of people from hundreds if not a thousand years before, I was disturbed. There was also the fact that the same character remembered when they were a baby, not even a few months old. I couldn’t finish it after that and am sad about it as I had enjoyed the book so far otherwise. There are mentions of nude statues.

Disclosure of Material Connection: I received this book free from the publisher through the BookLook Bloggers <http://booklookbloggers.com> book review bloggers program. I was not required to write a positive review. The opinions I have expressed are my own. I am disclosing this in accordance with the Federal Trade Commission’s 16 CFR, Part 255 <http://www.access.gpo.gov/nara/cfr/waisidx_03/16cfr255_03.html> : “Guides Concerning the Use of Endorsements and Testimonials in Advertising.”