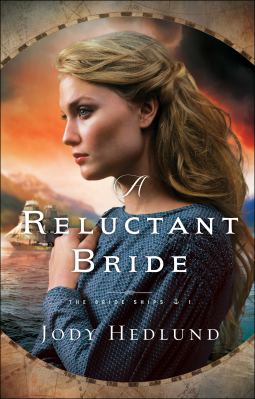 About: Living in London’s poorest slum, Mercy Wilkins has little hope of a better life. When she’s offered an opportunity to join a bride ship sailing to British Columbia, she agrees. After witnessing so much painful heartache and loss in the slums, the bride ship is her only prospect to escape a bleak future, not only for herself but, she hopes, someday for her sister.

Wealthy and titled Joseph Colville leaves home and takes to the sea in order to escape the pain of losing his family. As ship’s surgeon, he’s in charge of the passengers’ welfare aboard the Tynemouth, including sixty brides-to-be. He has no immediate intention of settling down, but when Mercy becomes his assistant, the two must fight against a forbidden love.

With hundreds of single men congregating on the shore eager to claim a bride from the Tynemouth, will Mercy and Joseph lose their chance at true love, or will they be able to overcome the obstacles that threaten to keep them apart?

My Favorite Character/s: Mercy was so different (in a good way, I promise!), her character so strong and kind — never caring for herself, but for others. I don’t really understand where she was coming from and it was nice getting to see why she did what she did.

My Verse for Mercy is Luke 10:33 But a certain Samaritan, as he journeyed, came where he was: and when he saw him, he had compassion on him, (King James Version.)

Joseph was a wonderful character and he was so good for Mercy even if they didn’t know it at first, and I enjoyed reading when he put a curtain . . . Mr. Collins (Pride and Prejudice) like character in his place. 😉

My Verse for Joseph is Romans 8:1 There is therefore now no condemnation to them which are in Christ Jesus, who walk not after the flesh, but after the Spirit. (King James Version.)

My Thoughts: In the past, I’ve heard of Bride Ships, the idea of them was odd, interesting, and yet slightly romantic and scary . . . I guess?

I’ve read Mrs. Hedlund’s books before and enjoyed them, which led me to sign up for the launch team with little hope of getting on since I hadn’t been on any launch teams for the author before . . . But, after a while, I got an email saying I got a place and to expect my ARC paperback in the mail soon. Long story short I got it in the mail a few weeks later and, um, read it within hours. I just couldn’t put it down, the romance was perfect, the characters bond so sweet and loving. In all this is a wonderful novel from Hedlund! 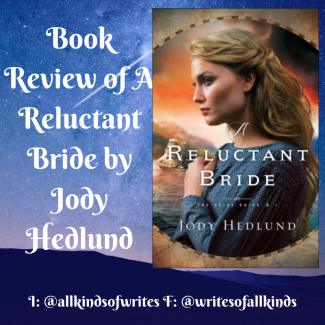