Book Review of Until the Mountains Fall by Connilyn Cossette 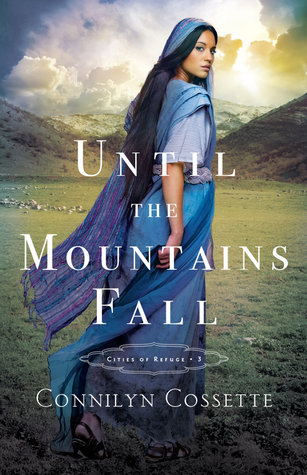 About: Recently widowed, Rivkah refuses to submit to the Torah law compelling her to marry her husband’s brother and instead flees Kedesh, hoping to use her talents as a scribe to support herself. Without the protections of her father, Kedesh’s head priest, and the safety of the city of refuge, Rivkah soon discovers that the cost of recklessness is her own freedom.

Malakhi has secretly loved Rivkah for years, but he never imagined his older brother’s death would mean wedding her himself. After her disappearance, he throws himself into the ongoing fight against the Canaanites instead of dwelling on all he has lost. But with impending war looming over Israel, Rivkah’s father comes to Malakhi with an impossible request.

As the enemies that Rivkah and Malakhi face from without and within Israel grow more threatening each day, is it too late for the restoration their wounded souls seek?

My Rating: 5 stars! (I’ve found some good books this week!)

My Recommendation: 13 to 16 up depending on how readers like romance. . . Warnings below, too.

My Favorite Character: Though she made mistakes and was at first a somewhat spoiled character she soon grew into a wonderful woman who fits perfectly with this

My Verse for Rivkah is Mark 5:34
And he said unto her, Daughter, thy faith hath made thee whole; go in peace, and be whole of thy plague. (King James Version.) (Plague in this verse has to do with Rivkah’s sins.)

My Thoughts: This Biblical fiction, was actually Biblical fiction — set during Bible times but not changing a book of the Bible. There isn’t much that people know about the time this novel was set in but Cossette showed what I imagine life was like during the time. She did amazing with the setting and stayed true to the time without taking away from the enjoyment of fiction. I loved this book and I don’t often say that about the Biblical fiction I read.

Warnings: A man drugs a woman, slavery, some drinking, mentions of being unfaithful, (not true.), characters die . . . They are at war sometimes so, yeah, all that and stuff.

I received an ARC of this book from the publisher in exchange for my honest review — all the thoughts are my own.