Book Review of The Express Bride by Kimberley Woodhouse 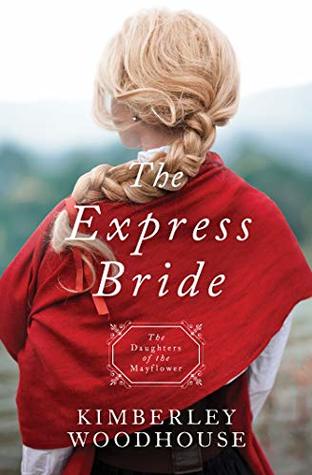 About: The Wilderness Is a Great Place to Hide
Jacqueline Rivers manages a Pony Express station in 1860 Utah territory after her father’s death. There are daily stresses placed on her in this unconventional role—and now a government official is asking her to sniff out counterfeiters. When Elijah Johnson passes through on the stage while on an exhausting quest to find his boss’s heir, he doesn’t want to leave the beguiling station manager. In fact, he may never leave when caught in the crossfire of the territory’s criminal activities. Jackie can’t decide if Elijah is friend or foe. Can she remain strong when secrets of the past and present are finally unearthed?

Join the adventure as the Daughters of the Mayflower series continues with The Express Bride by Kimberley Woodhouse.

My Recommendation: 13/16 up for slight violence.

My Favorite Character: Jack, Jackie, Jacqueline, no matter the name she’s a lady and one you’ll love with every word of the book. Her determination to do right and follow fulfill her father’s work was beautiful.

My Verse for Jack is Romans 8:28
And we know that all things work together for good to them that love God, to them who are the called according to his purpose. (King James Version.)

My Thoughts: Ah, *sighs happily* this is so sweet and sad all in one. The travel that starts off The Express Bride, the mysteries were interesting; one of which I had figure in the first few chapters and the other that kept me guessing, and the romance was sweet and the relationship cute. The family that wasn’t family through blood but love, all of it makes this one to read!

I received an ARC of this book from the author — all the thoughts are my own and I am truly happy to share my review.