Book Review of Love At Arms by Kelly Long 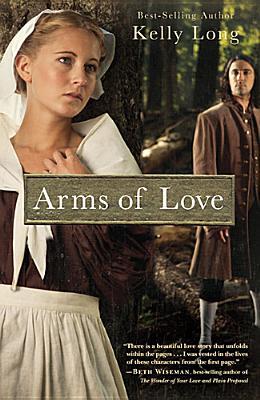 The year is 1777. America is in turmoil. And Amish life is far different than today.

Pennsylvania in the late 18th century, once called William Penn’s Woods, was an assortment of different faiths living together for the first time in American history. Included in this tapestry was a small and struggling population called Amish.

Surrounding this peaceful people were unavoidable threats: both Patriots and the British were pillaging land and goods for the sake of the war, young Amishmen were leaving the faith to take up arms and defend freedom. A simple walk in the untamed forests could result in death, if not from bullet or arrow, then from an encounter with a wild animal.

Amid this time of tumult, Adam Wyse is fighting a personal battle. To possibly join the war efforts and leave his faith, which would mean walking away from the only woman he’s ever loved: Lena Yoder. But for that love he’s made a promise that may keep them apart permanently.

When Adam withdraws from Lena, she’s forced to turn to his brother, Isaac, for support. Must Lena deny her heart’s desire to save Adam’s soul? And will life in this feral and primitive New World be more than this peace-keeping people can withstand?

My Review: Uhhhhhhh, well then. That was different? I thought it would be interesting to read about an Amish man set in the Revolutionary war era but I was sadly mistaken. The book started well but soon lost my interest. The fact that Adam was abused for no reason was bad enough. That is until you get to the last pages and it turns out his father abused him because at nine Adam saw his dad murder a guy who had touched his wife’s hair once . . . Uh, one Amish don’t believe in using weapons, they won’t fight, and here’s an Amish man that brutally murdered a man? And then went on to abuse his young and helpless son so much with a whip that he couldn’t stand to have to his back touched, the father would refuse to let anyone but the wanton serving girl bandage him up. Oh, and I forgot! The dad, he’s a deacon and nobody cared that he beat his younger son. Sickening! It ends with him confessing and not receiving any punishment but what he had already been punished with; meaning the cat attack that nearly killed him, I mean.

Adam also got in a fight if that’s what his attacking another man could be called, I believe it was suppose to be PTSD induced but no. And Lena’s father marrying an “Englisher”? Not a chance! A true Amish bishop would never let one of his community marry outside of the Amish people. And Adam’s brother getting engaged to Lena was pointless, sure the brother was the perfect brother but he wasn’t a guy I could see marrying even if commanded to do so by his father.

Of course that was not nearly enough drama because after fighting so hard for the girl he loved she was bitten by a rattlesnake on the way home on their wedding day. She was fine before the week was out though. So happily ever after.

I’m sorry but I cannot recommend this book with the violence, abuse, murder, and romance that was not even almost romantic.

I just have to add, Lena had a dream in which her mother told her of Adam’s promise not to marry her daughter until he was free of his past.

The unreal plot of this book was almost humorous but so unrealistic that it was sad.

If you read this I’d love to know what you think of it. I’d like to say I was harsh on the book but I really wasn’t. But maybe this is the book for you; try it out. See if you like it if it sounds interesting to you, I know I wish I hadn’t touched it.